EDIT: This post was written before the war. Since February 24, 2022, Russia has invaded Ukraine. You can find the 2-month war summary here.

Since my previous month’s report, I dug deeper into the history of Russia-West relations.

In the previous version of this report, I was presenting each side’s arguments. But the more I cross-checked every statement, the more misleading and false statements accumulated in public declarations. The Kremlin’s declarations often contradict themselves over time, as much as in their acts.

Since I’m looking for the objective truth, I have to deconstruct all statements from both sides, and I can’t simply pile up what each side is saying, because it would be greatly misleading otherwise. Indeed, most people have a tendency to assume that the truth is probably a middle ground between the two opposing sides. But half a lie is not the truth. And that’s why the Kremlin has a long history of deceptions because it really has some degree of influence on the western populations, not to mention its own population. Even myself, I fell into some of their fallacies before doing these deep researches, even if I’m used to double-checking what I hear. After reading this report, you might discover that some of these lies are more stealthy and pervasive than they look.

Also, if it’s the first time you read one of my foreign affairs reports, I recommend you to read first how and why I prepare these reports, to know their sources, how you can interpret them, and their limits.

Lastly, I make a distinction between Mr.Putin, the Kremlin (which includes Putin and his advisors), Russia as a country with its thousands of years of history, and the Russian current population. Of course, these groups share some aspects, but they also have strong differences in others. The nuance is important to fully understand the situation.

It’s also important to remind that Russia is currently governed by an authoritarian regime, which is of course not a democracy by western standards, but not totalitarian either. Putin enjoys much more authority in his country than Western presidents in their own, but not as much as Stalin or Hitler did, for example. Putin has some constraints. It’s important to understand why he can’t go directly for what he really wants and needs a complex strategy to achieve his goal without generating excessive social unrest in his country. This report doesn’t assume what he currently wants but underlines the differences between what he said and what he actually did in the past when lies become clear and unquestionable.

Decoding the truth from the lies

FACT: Russia’s territory is very exposed and difficult to defend

FACT: Russia was invaded twice, but it was 80 years ago

MYTH: The West is threatening Russia

FACT: Russia invaded and killed several of their neighbors

MYTH: The US and NATO started and inflated the Ukraine Crisis

MYTH: The US use the Russia-Ukraine crisis to divert attention

FACT: Russians have illegitimate resentment against the West

MYTH: Ukraine is part of Russia

FACT: Russia tries to erase the Ukrainian culture for 90 years

MYTH: Crimea and Dombas held democratic referendums to decide which country they should belong to

MYTH: NATO is threatening Russia with its continuous expansion

FACT: NATO is here to defend, not attack

FACT: Joining NATO is based on free will, not pressure

FACT: Putin is ready to aggress

Now that we clarified the respective positions, we need to assess the capabilities of Russia compared to the West, to evaluate the potential decisions and consequences both sides may take.

The different scenarios, their probabilities, and consequences

Basically, we face 2 main scenarios, Russia invading or not invading Ukraine, each with different ramifications in their consequences.

But before exploring these 2 scenarios, let’s start by what will most probably happen in all cases.

In all cases, Putin will probably favor the general tactics that worked for him so far 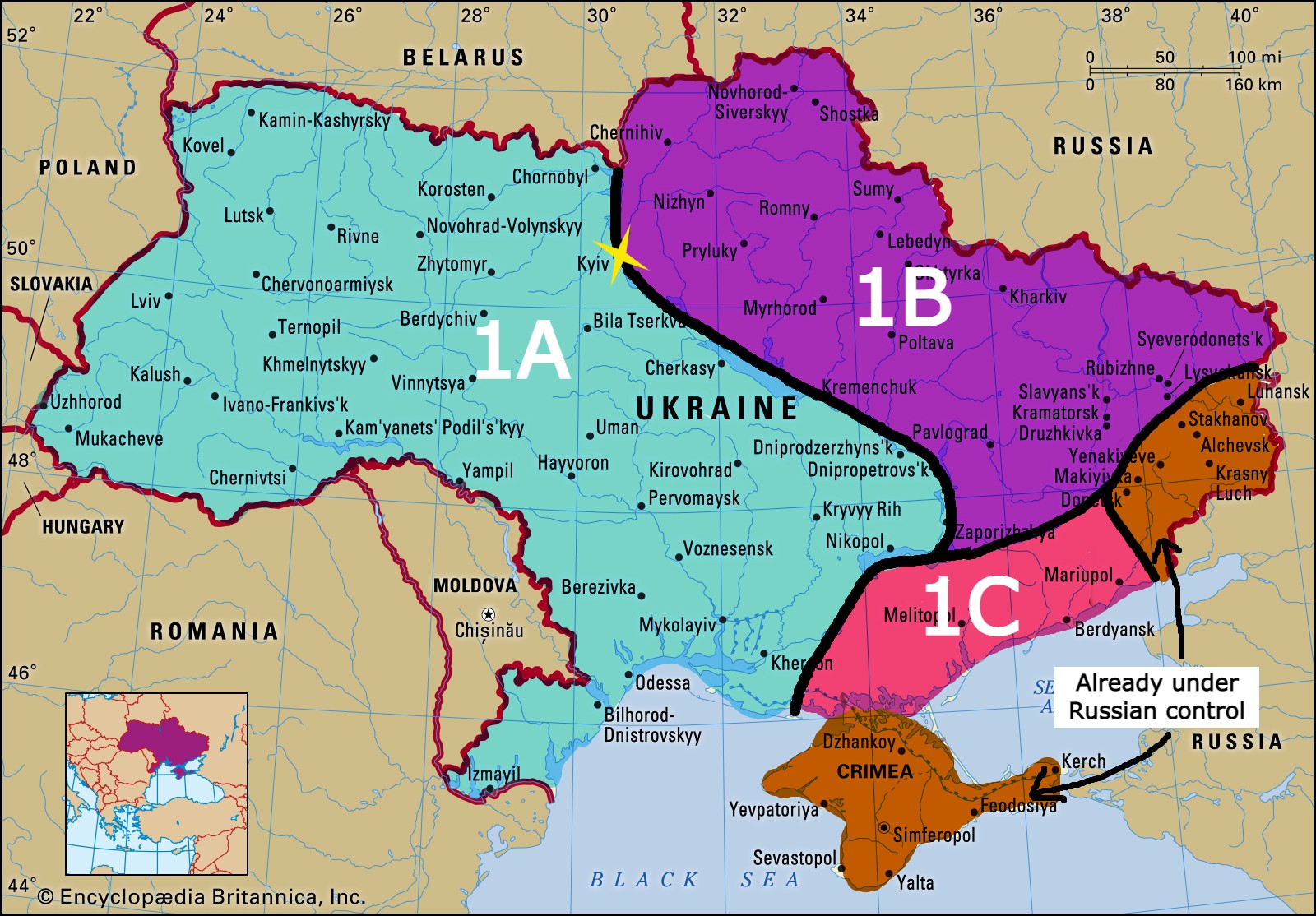 An animated version adds some nuances, displaying the south Ukraine (Odessa) being invaded first with an amphibian assault:

In a nutshell, the future of the Russian neighbors, and by extension European safety, will depend on how much determination the West will display facing Russia.

As the old Latin proverb says, Si vis Pacem, Para Bellum, which means “If you want peace, you must be prepared for war”. Or, as US President Theodore Roosevelt stated it, speak softly but carry a big stick. Negotiation is only as good as how much it can be backed by strength and determination.

US President Joe Biden seems to have understood the stakes and how to deal with the problem, while at the same time the EU is still divided and reluctant to confront Putin, because the EU would be hit hard economically if they had to stop doing business with Russia. The EU’s hesitations, with Germany having too much to lose if they had to cut the Russian gas in the middle of the energy crisis, and France still betting they can build a security partnership with Russia, could be interpreted as weaknesses by Putin, and eventually signal him a green light to invade Ukraine, which eventually would give him more confidence to try riskier land grabbing in the future.

As Foreign Affairs magazine stated id, Europeans must establish priorities, including confronting a difficult question most of them avoid: What are they willing to fight and die for?

It’s time for Europe to wake up, assume their own defense, and start to think as the United States of Europe, instead of a group of countries.

This is an example of the “highly contested” post-covid world described by many intelligence agencies. Failing economies push authoritarian regimes to become more aggressive, and only resolute defenders will be able to survive foreign aggressions.

Either Europe will evolve and strengthen, or succumb to more aggressive actors.